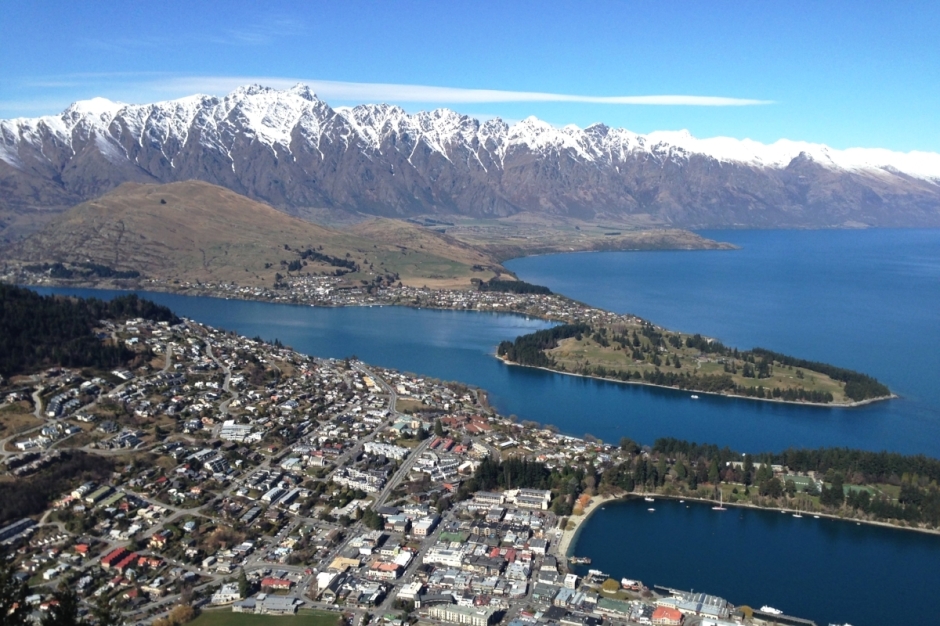 I’m a city-dweller. I like to holiday in big cities. I like exploring the complex jungles of concrete, bars and metro systems. Nature is something I find in city parks or on a day-trip before returning to the sanctuary of my apartment at night. I run but I can’t ski, and I certainly don’t snowboard.

Needless to say, New Zealand was not on my travel radar. As I boarded my flight to Queenstown in 2015, I felt like a foreigner. I was surrounded by people with chunky knit beanies and snow bags. I was an imposter. A city-dweller! But two beautiful friends were getting married in the snow, so to Queenstown I went. At least I could hike!

It turns out, I got struck with a horrible mystery virus and was bedridden for most of the holiday. But the few days I ventured out in Queenstown have stuck with me ever since. I was enchanted. There’s something magic about the city, with its pristine lake, distant snow-capped mountains and streets of adventure seekers. I missed the chance to experience the party-side of Queenstown (which I’m told is wild), but even the wine bars with log fires were gorgeous and cosy. Queenstown, you won me over!

Getting there is a short 3 hour flight from Melbourne or Sydney or 10 hours from Perth (via Sydney, Melbourne or Auckland). It’s not exactly a weekend away, but it’s a winter wonderful that makes for a special week’s vacation.

Here’s my guide to Queenstown!

Queenstown sits along the shores of the mighty Lake Wakatipu, about 15 minutes from Queenstown Airport. It’s hard to take your eyes off the stunning water views, but if you gaze up you’ll see snow-capped mountains forming an almost distant fort around the town. The city centre is small and fairly flat, with just a few main streets and a pedestrian mall where most eateries, shops and hostels are. A little further around the lake (between 10-30 minutes walk) is a stretch of hotels, including Rydges and Mercure. You’ll quickly hit inclines once you leave the lake and CBD area.

My first instinct was to book a five-star hotel along the lake. However my boyfriend, who’s been to Queenstown before, said the majority were slightly out of the CBD (up to 30 minutes walk). Not far, but not ideal for a group or walking home from the pub. Instead, we booked Novotel Queenstown Lakeside for four nights (NZ$200/night). It was perfect! Just metres from the lakefront, and you literally cross a street to hit bars, dining and shopping.

The hotel itself was modern, clean and staff were fantastic. It was no problem to park our hire car but from memory, it was cheaper to park it on the street if we had multiple trips out. I didn’t eat at the bar or restaurant but everything looked good when I walked past. Being ill, I was so grateful for room service and free wi-fi! I had the minestrone soup delivered most days which helped bring me to back to health. But the absolute luxury of this hotel? It had a laundry! 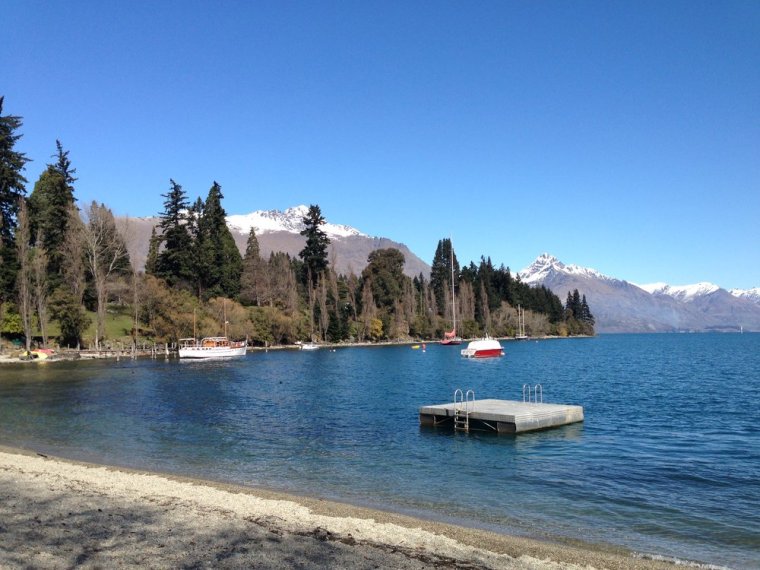 The long, skinny bags carried by many as they touch down at Queenstown Airport gives you a good idea of why people come here. Whether you ski or snowboard, you can easily spend a week in Queenstown hitting plenty of different spots. The bigger mountains are Cardrona, Treble Cone, Coronet Peak and The Remarkables. The ski season generally runs from early to mid June until October, but of course each year will vary. To get to the snowfields, you can hire a car and drive or catch one of the buses that leave several times a day from central Queenstown. Some offer hotel pick up too.

If you want to splurge, go heli-skiing. You’ll be flown to a spot only accessible by helicopter, have a guide and be spoilt with untracked runs. You want to be at least an intermediate to advanced snowboarder/skier to do this. The price varies on how many runs you want to do in a day, but it’s around NZ$1000. My boyfriend went with a group to Wanaka and he was ecstatic (and exhausted!) when he returned. If you can afford it, it’s a must-do.

Not a skier or snowboarder? Neither am I! My plan was to hike and trail run in Queenstown while my boyfriend was on the slopes all day. That didn’t to go plan, but I did manage to hike the Tiki Trail on my final day. The trail starts in central Queenstown at the bottom of the Skyline Gondola. Just follow the signs and walk up! It’s fairly steep most of the way and took me around two hours, but I was still sick and took it really easy. The highlight (apart from reaching the top) was seeing snow. The sun was out and it was maybe 6°C (42°F) – I didn’t expect snow at all! Clearly, because I was wearing Lululemon crops and sneakers.

Once you reach the top, there’s a cafe, restaurant, restrooms and a souvenir shop. Grab a cup of tea and take in the expansive views of Queenstown and The Remarkables mountain range! There’s outdoor seating too. Don’t want to hike? For NZ$33, you can catch the gondola to the top and back. I took the gondola down the mountain, but it was nowhere as rewarding as the hiking feeling!

I was sick as a dog, but I still got my retail fix! With The Remarkables as your backdrop, shopping in Queenstown is a unique way to spend a few hours. You can find plenty of stores selling New Zealand artisan foods and wine, along with retailers like Lululemon, Peter Alexander, Witchery and Quiksilver. You can also pick up hiking or snow gear from places including Kathmandu and Macpac. There are bigger shopping centres on the city’s outskirts too. You wouldn’t visit Queenstown solely to shop, but I happily enjoyed an afternoon exploring the stores.

There are some cute towns near Queenstown and you’ll encounter spectacular views throughout the journey. I’d recommend Arrowtown (20 mins) for an afternoon or drive through the stunning Crown Range to Wanaka (1 hour), where we stayed three nights. On the way to Wanaka, stop at the Cardrona Hotel for lunch (40 mins from Queenstown). It’s one of New Zealand’s oldest pubs and one of only two remaining buildings from the Cardona Valley gold rush era. You probably need to double these travel times though, because you’ll constantly stop to take photos!

What do tourists do after hitting the snow all day? Shower, eat and drink! There are heaps of dining options in Queenstown, from classic pubs to Mexican, Japanese and Starbucks. I didn’t eat out much (like I said: room service minestrone) but the few places I did go were reasonably priced with very sizable portions.

Do NOT leave Queenstown without having a Fergburger! My sensational man delivered one to me at our hotel room when I was bedridden, insisting it was a must-have Queenstown experience. He wasn’t kidding. My ‘Holier Than Thou’ (NZ$11.50) with tempered tofu, coconut satay sauce, bean sprouts, fresh cucumber and tomato was truly a spiritual experience. O-M-G.

While my trip to Queenstown was tame, I did make it to a few wine bars. It was heavenly to sit by a log fire, in dim lighting with a glass of a New Zealand white. You’ll smell the distinctive woody smoke in almost every place you go to. It’s easy to bar hop across the city as you’re never far from a drop!

If you’re staying centrally, you can get around Queenstown on foot. We booked a hire car and collected it at the airport, as we needed to get to Wanaka for our friends’ wedding. It was handy for checking out nearby towns but certainly not essential for Queenstown. As many people come to New Zealand to explore the landscape, there were plenty of hire cars at the airport and largely affordable. As mentioned, there are regular buses to the snow fields and some offer hotel pick ups.

While I didn’t explore as much of Queenstown as I wanted to, my limited trip was still magnificent. New Zealand is truly a land of jaw-dropping beauty, and the areas I saw were pristine, clean and sparsely populated. I’ve already recommended Queenstown to family looking for a week long holiday somewhere different, and who can resist a winter wonderland with wine? I’m looking forward to returning and conquering those trails – and experiencing the party town vibe!

QUESTION: When have you been struck by illness on vacation?